Bryan and his band descended upon the beautiful seaside city of Dubrovnik with open eyes. This was the city’s first public concert inside the stone castle walls in it’s 1300 year history.

An accolade BF and the band would later honour. The sun pounded down onto the stage during soundcheck, trumpets singing down main street, the locals were eager for a taster before the nights main event.

With the soundcheck done, BF and the band headed back to the hotel until the 10pm showtime. Soon before the band were due to meet at the hotel reception, clouds were gathering. Moments later a vicious medieval storm began.

With sheet lightening crackling and rain bucketing down relentlessly, the show would inevitably be cancelled.

The crew frantically tried to move all the equipment into safety from the storm, but the stage and musical equipment had been soaked from all angles and the wind was causing havoc with the lighting rig and video screens.

The stage manager radioed for BF and the band to wait at the hotel until further notice. The rain just would not stop, thunder and lightning swirling constantly. This had no show written all over it. 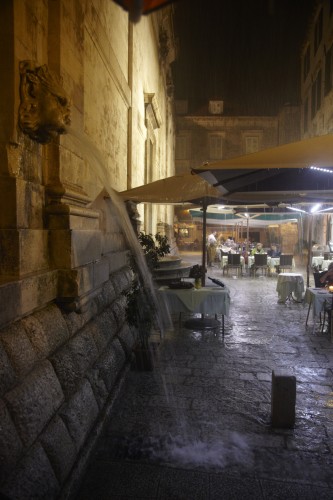 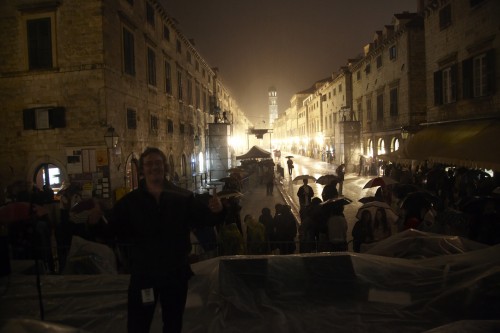 After an hour of constant rain things started to look up.

The rain began to slow and calls were being made to try and get the show back on track. The crew would first try and get the stage electricity going. Even though the rain had temporarily stopped, there was still a lot of doubt the show would go on. 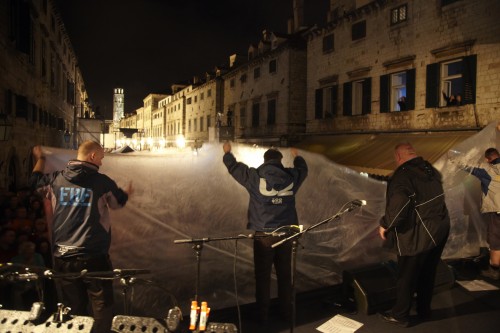 The town officials were are as keen as the band to make it happen. Monetarily the power was back on and speaker tests began to echo around the city. By now, two hours after the scheduled show time the stage was being dried with towels and the instruments repositioned.

Eventually the band appeared on stage and began the BFO set. The people of Dubrovnik had a show at last!