Bryan Ferry appears in a fantastic new book by acclaimed author Daniel Rachel. ‘Isle Of Noises’ is a fascinating insight into the minds and writing methods of 27 of the UK’s greatest musicians. Published by Picador, this beautiful hardcover book is illustrated with archive photos and features in-depth conversations with artists such as Ferry, Ray Davies, Sting, Damon Albarn, Johnny Marr and Noel Gallagher. 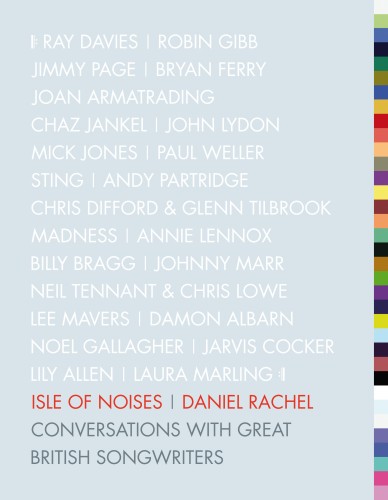 Excerpt from Ferry’s chapter within ‘Isle Of Noises’:

Can you recall writing ‘I Thought’?
Ah, yeah. That was another co-write with Brian Eno. It’s one of the nicest things. People don’t really notice that record. It started in St Petersburg. I was over visiting Brian; I was staying there. We thought we’d try and write a couple of things together. He had this one sequence which I thought sounded great. I quite like the lyric of that. I don’t really analyse what I write. I had the title; it came quite fast. I like to write things that move people. I like to write things that move myself. The best songs that I’ve written have been ones where you shed a tear in the writing. It sounds silly, but, where you’ve been actually very moved doing it, that’s when you know it really works and means something. You don’t have to do that with all of the songs, but occasionally you get that and think, ‘Ah, this is going to last.’

When has that happened to you?
The most recent time was on my last album, Olympia. I’ve a song called ‘Reason Or Rhyme’, but it’s happened before, I think it’s a good song. Sometimes you get inspired not only by the melody but by the performance of other people. Marcus Miller is a wonderful bass player and great musician, and he really got inside that song. I found that very inspiring when I was completing the lyrics. The piano playing I did I liked. Sometimes I’ve kept away from playing on records . . . there’s a lot of great keyboard players. My style is a bit unusual: it’s very primitive but it works for me.

Isle Of Noises is available to buy on Amazon: