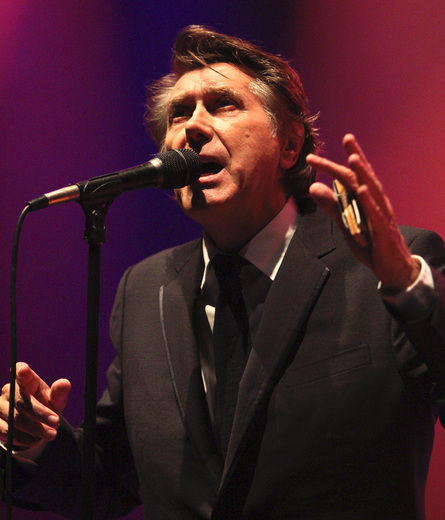 The sometime Roxy Music frontman pulled into town with his Olympia tour – named after his 2010 solo album – as part of his first North American solo trek in a decade.

It helped that the 66-year-old Ferry, still sophisticated, sexy and glamorous in a beautiful black suit and tie with a dreamy voice that seems to have improved with age, brought a big band and slick production with him for the crowd of 3,300 gathered over Thanksgiving long weekend in Canada.

There were six musicians, including Roxy Music’s Paul Thompson on drums and outstanding female sax player Jorja Chalmers, and four backup singers. They were accompanied by two go-go dancers and filmed vignettes for every song in a set list -new footage sometimes mixed with old film clips – that encompassed his 40-year-career both with Roxy and as a solo artist.

“It’s great to be back here in Canada after all this time,” said Ferry, who played keyboards and piano when he wasn’t at the microphone, clapping his hands, dancing or playing harmonica.