Last week saw Bryan and his orchestra do three shows in Europe to critical acclaim. Starting in Berlin the band moved to Niedernhausen near Frankfurt before ascending to Zermatt. The lineup featured the core band from the Jazz Age album, some familiar faces from years past, and a few new ones. Ian Dixon provided keys and saxophone, guitar-hero Oliver Thompson featured on a new Gibson, Cherisse Osei commanded the drums, whilst debutant singers Bobbie and Jodie wooed and bassist Tom Wheatley plodded along on both string and electric instruments. Wheatley Junior is the son of Martin, who provided banjo and guitar on the ‘The Jazz Age’ and 1999’s ‘As Time Goes By‘.

The shows were relatively stripped-back from previous tours, with classic lighting highlighting each player’s solos. The songs performed were an eclectic mix from Ferry’s solo career, some of which hadn’t been played live in over 30 years. 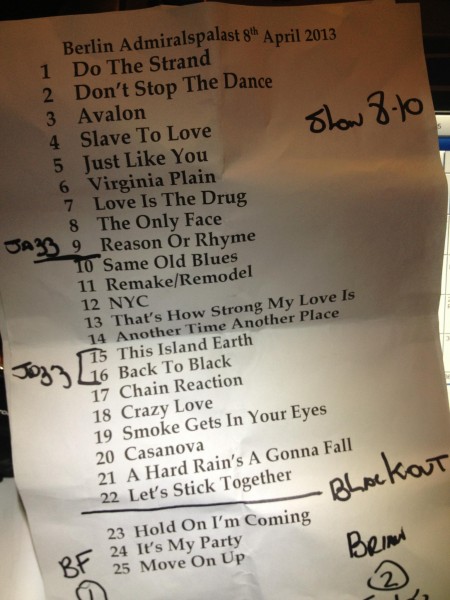