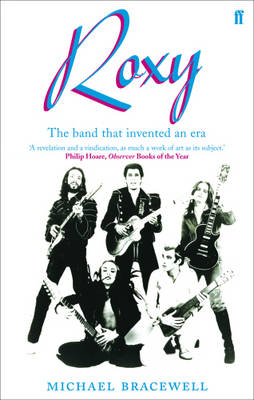 Roxy: The Band That Invented an Era (Paperback)

Micheal Bracewell’s “Roxy” is the fascinating and largely unknown story of the individuals and circumstances which combined to form the groundbreaking band Roxy Music.

Written with the assistance, for the first time, of all of those involved, including Bryan Ferry, Brian Eno, Andy Mackay and Phil Manzanera; the fashion designer Antony Price, the founding guru of pop art, and Bryan Ferry’s tutor, Richard Hamilton, and many more, “Roxy” is also the account of how pop art, the avant garde underground of the 1960s, and the heady slipstream of London in the sixties was transformed into the fashion cults of revivalism, nostalgia and pop futurism in the early 1970s.

About the Author
Michael Bracewell is the author of six novels and two works of non-fiction, including the much acclaimed England Is Mine. His writing has appeared in The Penguin Book of Twentieth Century Fashion Writing and The Faber Book of Pop, and he has written catalogue texts for many contemporary artists, including Richard Wentworth, Damien Hirst and Gilbert & George. He was the co-curator of ‘The Secret Public: The Last Days of The British Underground, 1977-1988’, at Kunstverein Munchen in 2006, and was a Turner Prize judge in 2007.