Guitarist Mick Green has passed away aged 65. One of the original breed of authentic British lead guitarists, Green initially lent his considerable skills to Johnny Kidd & the Pirates before becoming guitarist of choice for artists such as Van Morrison, Sir Paul McCartney and Bryan Ferry.

Mick’s proffesional career started in the early 60’s when he joined old schoolmates Johnny Spence and Frank Frley at the tender age of 16 in ‘Johnny Kidd and the Pirates. Kidd, best known for his classic chart topper Shakin’ All Over, was a dynamic stage performer and wanted the visual symmetry of a three piece accompaniment. Without a rhythm guitarist in the Pirates, Mick perfected what was to become his trademark style- playing lead and rhythm pats simultaneously. Indeed, it was during the 1970s that the Pirates came into their own as a live act and made a huge impact on the era’s flourishing pub-rock scene.

More recently, Green appeared on Sir Paul McCartney’s 1999 album, ‘Run Devil Run’ and Van Morrison’s, ‘Back On Top’, ‘Down The Road’ and the 2008 album, ‘Keep It Simple’. Mick played on almost every track on BF’s album ‘Frantic’ and toured with Ferry throughout 2002.

His son, Brad, said, “It is with the greatest of sorrow that I have to inform you all that my father, Mick Green, has this morning (Jan. 11 2010) passed away. My dad will be deeply missed by his family, friends and fans all around the world. He inspired and dazzled with his amazing talent and his sharp personality and wit. His spirit and his music will continue to live on through his music. Thank you all for your support and thoughts.”

Mick Green was a brilliant guitar player with his roots firmly based in the traditions of American rock n’ roll music. I had the pleasure of working with him both on tour and in the recording studio. He had enormous talent and was a man of great humour, sharp wit and generosity of spirit. He will be greatly missed by myself and all my colleagues in music. 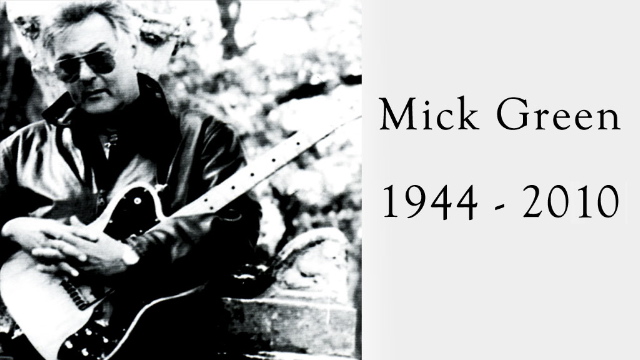 Video of Mick playing ‘Both Ends Burning’ with Bryan in 2002: