Given the four-year hiatus since ‘Siren’, expectation ran high for the release of ‘Manifesto’ in the early spring of 1979. Roxy Music had amassed one of the most impressive back catalogues of recordings in the history of pop and rock music, including cocktail hour chanson, classic love songs, retro-futurist rock and roll, Pop art collage and dazzling, café concerti elegies for the beautiful and damned. The common denominator of these many adventures into the stylistic and emotional capacities of pop music was their unwavering sense of timeless modernity. How might ‘Manifesto’ continue that lineage? 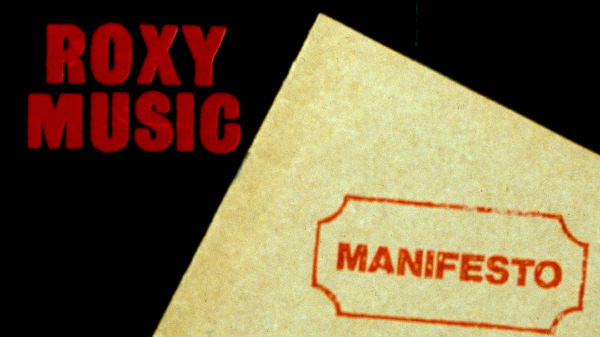 The answer to this question could be heard in the album’s opening title track: a gradually building overture, sombre yet tense, in which the development of the lyric – a fatalistic call to arms – seemed in one sense to describe both the defiance and the loneliness of the avant-garde. Co-written with Phil Manzanera, and portentous and hard hitting, ‘Manifesto’ was a track that seemed to strain its dramatic potential to breaking point – brilliantly giving way to the thrilling guitar run and high impact dance beat that opened the following track – ‘Trash’. This was one of those conflations of musical opposites out of which Roxy Music had defined their peerless combination of breathtaking elegance and sheer energy – as though Kurt Weill or Noel Coward had formed a musical alliance with Otis Redding and Jimi Hendrix.

Tellingly, on the original vinyl release of the album, the first side was titled ‘East Side’ and the second, ‘West Side’; and ‘Manifesto’ established an overall musical atmosphere that was as dark and quickly pulsed as a New York nightclub yet as romantic and beguiling as a Parisian boulevard. It was an album that seemed to re-route the richly American energy of disco and dance music through a filter of European melancholy and baroque opulence. Like all Roxy Music records, the album had a particular, unifying intensity – brilliantly rendered in visual terms by the declamatory yet inscrutable artwork on its cover. 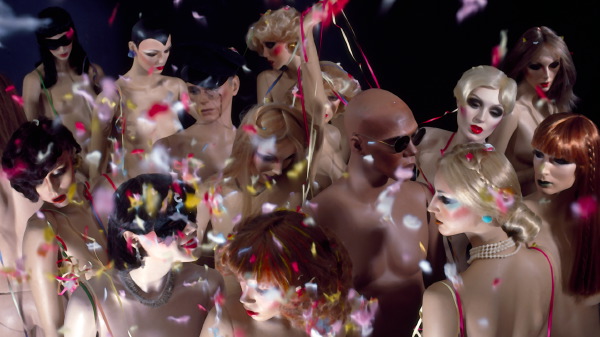 Conceived once again by Ferry, and co-created with Antony Price – whose super- futuristic King’s Road boutique, Plaza, was name-checked on ‘Trash’ – the album artwork depicted a Studio 54 type party: a riotous gathering of the beautiful people, exuberant, extravagant and breathlessly aloof – the very high society, in fact, that one might have imagined peopling the romantic world defined by Roxy Music. And yet the party-goers were all played by mannequins: lifeless but synthetically beautiful showroom dummies, the art historical ancestry of whom ran back through Pop art to the ironical-fetishistic eroticism of surrealism.

What seemed at first glance to be a happiness explosion turned out to be a highly ambivalent and artistically poised statement about one of Bryan Ferry’s favorite artistic themes: the seductive beauty of artifice and the emotional void at the heart of the high life. Andy Warhol and F. Scott Fitzgerald might well have been the patron saints of ‘Manifesto’s heady mix of luxury and cold detachment. (Fans would discover that even the typeface used on the album’s cover had been created by Ferry from that used by avant-garde artist and self-professed modernist rebel, Wyndham Lewis, for his shocking pink coloured journal of 1913, ‘BLAST’.) 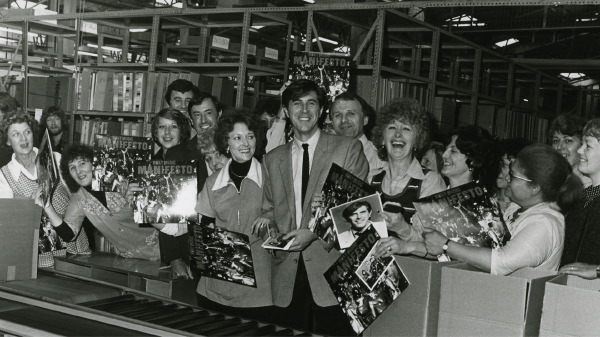 Vitally, the album extended and enhanced the notion of dance music, delivering both ‘Angel Eyes’ and ‘Dance Away’ – which would subsequently be released in re-mixed versions and become classics within the currency of dance music. ‘Spin Me Round’, ‘Still Falls The Rain’, and ‘My Little Girl’ created the precise balance of classic pop love song; while ‘Ain’t That So’ can be heard as a musical premonition of the highly filmic atmospheres that Ferry would work to perfection on his solo recordings of the 1980s, such as ‘Boys and Girls’ and ‘Bete Noir’.

As ‘Roxy Music’ and ‘For Your Pleasure’ had defined the possibilities of pop music and pop styling at the beginning of the 1970s, so ‘Manifesto’, in a somewhat novelistic manner, seemed to describe the mood at the decade’s end. It is a record that seems to catch a shift in the zeitgeist, from street to catwalk and back again – the romance of high gloss and high fashion played out as a slow fade, from brilliant artifice to cold break of day.