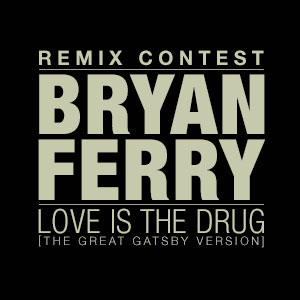 BF is no stranger to remixes – reworking tracks from the 2011 Olympia album, the October 2013 release of the triple-vinyl ‘Don’t Stop the Dance’, and the most recent collaboration with Norwegian disco-edit king Todd Terje, “Johnny and Mary” from Terje’s debut LP It’s Album Time.

We’ve teamed up with Beatport Play to give YOU the chance to be the next artist or producer to remix a Bryan Ferry track. Make your mark by reworking the ’20’s Jazz-tinged version of classic track “Love is the Drug” which was originally produced for Baz Luhrmann’s The Great Gatsby soundtrack. Austrian producer Parov Stelar has already delivered his own signature electro-swing version of the track (listen below!)

With only days to go until the June 9th deadline, there’s still time to get yours uploaded!