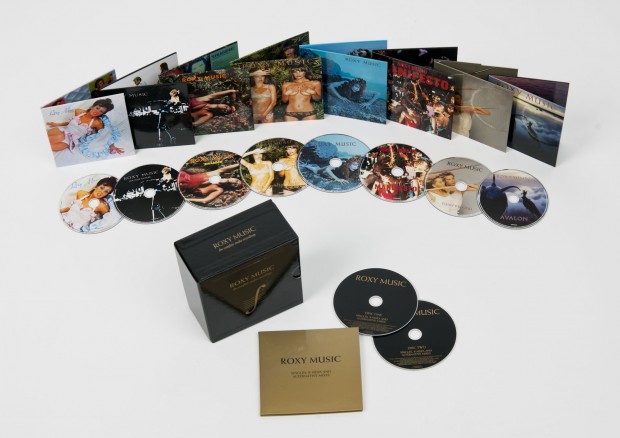 THE COMPLETE STUDIO RECORDINGS 1972-1982.
The CD BOXSET is now available in the UK and US from AMAZON.

Uncut – August 2012 – 10/10
“Ample testament to the fact that, for an unparalleled five or six album run,
Roxy Music were the most distinguished adventurers British pop has ever known.”

Classic Rock Magazine – August 2012 – 10/10
“These recordings are a map of a supremely original band’s journey
from unconsolidated beginnings to rarified perfection.”

Pitchfork – August 2012 – 9.5/10
“The music on this box set is often startling, usually wonderful
and more affecting that you might have expected.”

Line of best fit – August 2012 – 8/10
“a testament to the brilliance of Roxy Music all in one handy place,
The Complete Studio Recordings is a wonderful and necessary artifact
and, to cop one last lyric, that’s the main thing.”

A.V. Club – September 2012 – ‘A’ Grade
“And, after years of repackaging, the box set finally gets it right:
Restoring the original track listings and full art to the albums
and collecting the singles, B-sides, and remixes in one place. ”

Nominated for ‘Reissue of the Year’
in the 2012 Orange Classic Rock Roll of Honour.