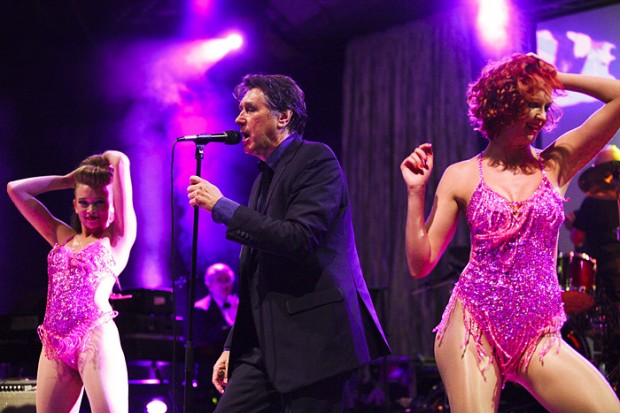 Bryan Ferry’s OLYMPIA TOUR came to Tel Aviv, Israel in June. Here’s an English translation from the review that originally appeared on Mako.co.il, 23/6/11. Thanks to Michael Hillman for the translation.

Bryan Ferry conquered Heichal Hatarbut with a fabulous concert and gave the crowd a musical and visual feast, including three Bob Dylan covers. Amit Solanim tried to make some comparisons, and made Jimmy Hendrix turn over in his grave.

Bryan Ferry conquered Tel Aviv, armed with a suit and a host of nine musicians and two dancers. Exactly two days after his idol Bob Dylan left tens of thousands in the streets of Ramat Gan with a feeling of ambivalence, Ferry gave a passionate fan packed Heichal Hatarbut exactly what they were expecting – if not more.

Waved to the crowd, excited and invited fans to a get-together

It’s difficult if not impossible to make a comparison between the two concerts of Ferry and Dylan. Both artists, who have each left a significant mark on the world of music, came to Israel with lots of money in the bank and nothing to prove. The difference between the two concerts is just as big as the distance between Heichal Hatarbut and the Ramat Gan stadium. You know what? It’s actually more like the distance between our national stadium in Ramat Gan and Wembley.

If the main contention against Dylan was that he didn’t address the crowd, Ferry didn’t stop waving to the crowd with the excitement of a child, mentioned how happy he is to be in Tel Aviv for the first time, and if that’s not enough – he even invited the fans to an informal meeting in the “Third Ear” record shop in Tel Aviv.

And here’s another point for comparison – Bryan Ferry performed no less than three covers of Dylan songs. One of them, All Along the Watchtower, was also Dylan’s encore three days ago. Who performed the masterpiece better in the Holy Land? Dylan’s version was more like whiskey on the rocks, whilst Ferry’s performance was more like Martini garnished with an olive. One can say that it’s a matter of taste, but I’m sure that Jimmy Hendrix would have preferred the version of the British gentleman. Without prejudice.

At the age of 65 Bryan Ferry looks more like someone who wants to sell you life assurance than someone who is about to get you up from your chair and get you dancing. But he looked like this even when he was 25. In the last year he was accepted by the Queen of England as a member of the British Empire, and also suffered a heart attack. That’s the way it goes.

Two guitarists, a bass player, two drummers, a saxophonist, two backing singers and two sensual dancers and one Bryan Ferry who sometimes sung in the centre of the stage, sometimes sat at the organ, sometimes at the piano and sometimes pulled out a harmonica. A total of 12 people on the stage coming together in perfect synergy. Brian Eno, his friend-foe from Roxy Music, can be proud, or jealous.

The concert was perfectly planned with no possibility of deviating from the list of songs due to the fact that the video art that was projected onto the rear screen was coordinated with the music on the stage, such that even the Can-Can dancers at the sides looked as though they had been snatched from the Addicted to Love video of Robert Palmer.

The show opened with an elegant cover of Screamin’ Jay Hawkins’ “I Put a Spell on You” and continued straight to Ferry’s biggest radio hit “Slave to Love” followed by another hit from his solo period, “Don’t Stop the Dance”. With his aeonian suit (fitting for a presenter of Marks and Spencer), Bryan Ferry looked like the perfect combination between Dylan and James Bond.

Later on, Ferry treated us to a terrific cover of “Just Like Tom Thumb’s Blues”, Dylan’s 1965 classic. And later on he also performed Dylan’s “Make You Feel My Love”, which has already been covered by Adele, Garth Brooks, Kelly Clarkson and Billy Joel – but it seems that Ferry is the first one to give the song an original sound.

The Roxy Music fans were also treated generously, with performances of “If There Is Something” from the first and prodigious album, “Bitter Sweet” with a touch of German and of course the classics “Avalon” and “Love is the Drug”, which merited impressive numbers from Ferry’s current band.

Hysteria at the encore: The John Lennon cover

Worthy of note is Oliver Thompson, the 23 year old British guitarist who is accompanying Bryan Ferry in this concert tour. If there was a draft like in the NBA for casting rock band guitarists – he would be in first place. This chap is a real prodigy who we’ll be hearing a lot more from in the future.

The encore, which found Heichal Hatarbut in a positively charged hysteria, was a performance of Bryan Ferry’s most successful song in his career, a cover of John Lennon’s “Jealous Guy”. Here, I couldn’t restrain myself from taking out my mobile phone, like everyone, not just to film it, but to play the perfect performance to a friend.

Ferry proved what a great musician he is

Between popping into nostalgic corners, Ferry proved once again what a great musician he is, with the brilliant performance of Neil Young’s “Like a Hurricane”, even though the biggest moments of the evening were in fact the eighties hits from Ferry’s solo period, such as “Let’s Stick Together” which simply proves that the dreadful recordings made in the 1980’s studios did an injustice to some excellent songs. That is of course the case as regards numerous other artists, such as Bob Dylan for example.

And it’s impossible without a final comparison to the concert by the American giant in the Ramat Gan stadium on Monday. It just shows how wonderful a rock concert can be in a hall which suits the music, rather than in an athletics stadium that was built in honour of the Maccabi games in the 1950’s. It’s annoying to see how a carefully calculated number of ushers can keep exemplary control in a hall packed with people and not helplessly notice a flock of people going wild. It’s encouraging to see how an artist who receives so much love also knows how to reciprocate. Don’t be surprised if after this first trip, we’ll see Bryan Ferry here again in the near future. And please God, next time he’ll also sing “Virginia Plain”. 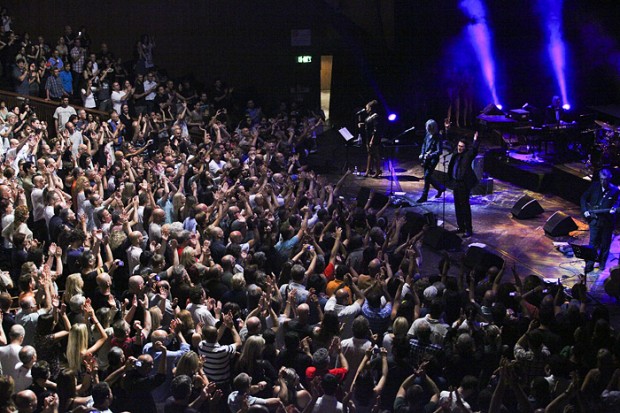