Last week Bryan Ferry and the Bryan Ferry Orchestra were in Cannes helping to kick off this year’s film festival with two instrumental performances to celebrate the release of Baz Luhrmann’s Great Gatsby. Not only were the band to play at the Warner Brother’s party to celebrate the premiere of the film, but also at an intimate after party, which was to be hosted by Bryan aboard the Johnnie Walker Voyager- an incredible yacht, which was very in keeping with the 1920s themed evening.

After their first sound check of the day, on Quai Laubeuf at the Warner Brother’s party venue, the musicians headed across the bay to the Johnnie Walker Voyager for their second. The orchestra diligently and skilfully battled against the elements to set up their instruments, as torrential rain poured down aboard the boat.

Despite the rain no spirits were dampened, and everything seemed to be on course for the evening’s proceedings. By eight o’clock a glamorous hoard of guests, including a breath-taking Cara Delevingne, were on board the yacht, sipping on cocktails before heading off to the Warner Brothers party to watch the BFO in action. A very persuasive Baz Luhrmann had some hours before the scheduled (instrumental!) performance, asked  Bryan to sing his Gatsbyesque renditions of Love Is The Drug, Back To Black and Reason or Rhyme. Despite the late hour, Bryan accepted and gave a show stopping live performance.  While the film’s stars, Leonardo DiCaprio, Toby Maguire and Carey Mulligan watched on, Baz led the way on the dance-floor, doing an impressive variation on the foxtrot with wife Catherine Martin to Love Is The Drug. Though impromptu Bryan’s surprise performance proved a wild success, and was roundly praised as having “made the party”.

Afterwards, it was back to boat for more cocktails and dancing as the orchestra were let loose, improvising and playing some fantastic and obscure 1920s jazz numbers. 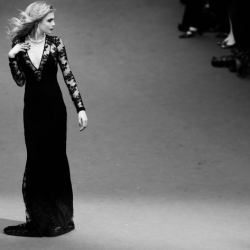