As the musical mood of ‘For Your Pleasure’ takes measured cool to freezing point, so the climate of ‘Stranded’, the third Roxy Music album, seems heavy with sultry drama and febrile languor.

Bryan Ferry’s conception and direction of Roxy Music’s artwork had always been an integral enhancement to the musical and lyrical temper of each record, and the sensuality of ‘Stranded’ was sensationally defined on its release in 1973 by the image across the high-gloss gatefold sleeve of the original release: a barely clad model – that year’s Playmate of the Year, Marilyn Cole – lying full length on what appeared to be the jungle floor, a fleshy white blossom lying beside her and her luxuriant hair spread out to one side. Her expression is imploring, her sensuality stylised and stressed by the tropical setting and the exaggerated abandon of her pose. As the record’s advertising campaign would see this image emblazoned down the entire length of London buses, so it reinforced the burgeoning iconography of Roxy Music as a newly imperial power within pop and rock music. 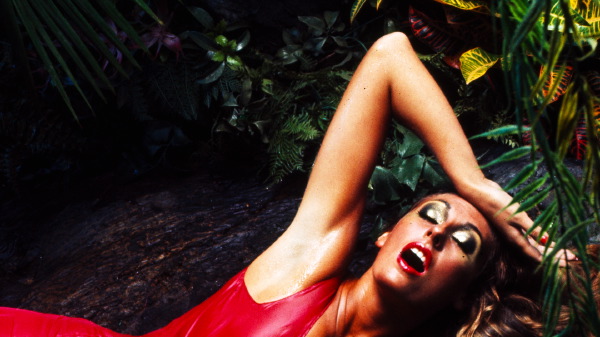 It would be of note to fans and critics alike that Bryan Ferry’s art direction of Roxy Music’s releases during the 1970s and early 1980s would reflect the development of the music, from retro-futurist collage to pristine pop classic, by gradually but succinctly redefining the sexuality of the filmic, high glamour cover girls who adorned the album sleeves. Thus, Kari-Ann’s heavily vamped ‘Vargas girl’ allure on the cover of ‘Roxy Music’, a visual Pop art serenade in pale pink, powder blue and gold, would give way to the fetishist femme fatale of Amanda Lear’s presence on ‘For Your Pleasure’. Now, with ‘Stranded’, the mood had changed yet again, from plain wrapper baby to flower scented dusk – affirming Bryan Ferry’s observation that Roxy Music did not, as some critics maintained, possess a particular ‘style’; but rather, in their mix of music and the visual imagery, bring together many different styles into a new synthesis.

With this in mind, ‘Stranded’ opens straight on to the highly charged atmosphere of a city sidewalk – the instant hit ‘Street Life’ seeming to confirm and enshrine Roxy Music’s reputation as the musical and stylistic epitome of modern cool – the term ‘cool’ being used here in its old jazz sense as the possessor and purveyor of a personal style that is as original and desirable as it is seemingly deft and effortless.

The first Roxy Music album to be recorded without the contributions of Brian Eno, ‘Stranded’ would also be Eno’s personal favourite of Roxy Music’s releases. The new member of Roxy Music would be Eddie Jobson, formerly of Curved Air, whose electric violin and keyboard playing would merge faultlessly with the progressive virtuosity, avant-garde sympathies and classical finesse of Manzanera’s guitar work and Mackay’s saxophone and woodwind. As ever, Paul Thompson would be the powerhouse on drums, whose playing could be as thunderous or nuanced, slick or sensitive, as each track required. 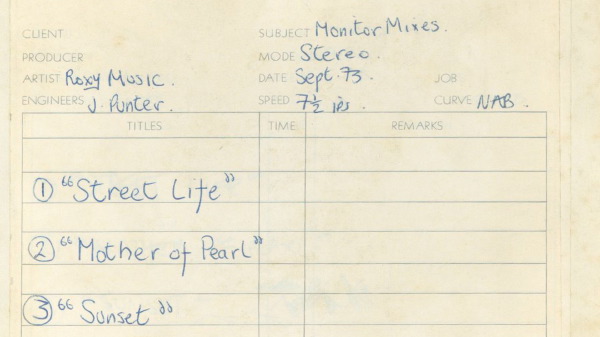 Musically, ‘Stranded’ is at once hard rocking, operatic, aerated with passages of near psychedelic extravagance and sensually brooding. It has a twilit mood, both lulling and tense, while also redolent of a cult of artifice: the musical playing and arrangements are very much like a brilliantly lit stage for the performance of Ferry’s vocal – a mesmeric theatricality that would become increasingly maelstrom-like on the group’s next album, ‘Country Life’.

Vocally, ‘Stranded’ is a tour de force for Ferry. It is the record on which he allows himself, as a singer, to revel in the sheer bravado of his inimitable personal range: the snarl and suave finger-clicking swagger of ‘Street Life’, ‘Amazona’ and ‘Serenade’; the beguiling crooner on ‘Just Like You’ and ‘Sunset’; the expressionist chanson of ‘Song For Europe’ and the impassioned, blues-inflected Americana of the epic, ‘Psalm’. On each, Ferry can be heard at his most dramatic to date – no longer wearing an artful mask, and adopting a series of musical personae, but trusting to the formidable impetus of his own creative identity. Arguably, it is with ‘Stranded’ that Ferry’s name, as an artist, becomes adjectival. From this point on every song he recorded, whether a cover version or a composition of his own, would be a self-portrait.